If you’re a plant owner, you’ve probably encountered fungus gnats at some point. These pesky little flies can quickly ruin your plants if left untreated.

This blog post will discuss the annoying fungus gnats and how they can harm your plants. We will also provide tips on how to get rid of them, so you can save your beloved plants!

So whether you’re a beginner or a pro when it comes to gardening, read on for some valuable information about how to deal with these pesky critters!

What are Fungus gnats?

Fungus gnats are small, dark-colored flies that are common in homes and greenhouses. They look like mosquitos, but, yeah, they don’t bite. They’re attracted to damp conditions and love to lay eggs in overly moist soil. The fungus gnat larvae of these flies feed on fungi, algae, and organic matter in the soil, which can damage your plants.

The larvae are small and white and often go unnoticed until they’ve damaged your plants.

They are more common in areas with high humidity but can also survive in drier climates.

Six different families of insects make up the broader category of fungus gnats. However, the two most common are the Bradysia species and Sciaridae.

Most damage to plants is caused by the larvae of Sciaridae, also known as “dark-winged fungus gnats.” These larvae are tiny (about ⅛ inch long), white, and have a black head. They’re often found in moist soil or near plant roots.

The Bradysia species is less common, but their larvae can still damage your plants. These larvae are slightly larger than those of the Sciaridae (about ¼ inch long), and they’re white with a brown head. You’ll usually find them in potting soil or other moist organic matter.

This is the first stage of a fungus gnat’s life when the female fungus gnat lays her fungus gnats eggs in moist soil. It takes about 4-6 days for the eggs to turn into a larva.

Fungus gnat eggs are tiny (about 0.13 mm long), white, and oval-shaped. They’re often difficult to see with the naked eye but can be found in damp soil or near plant roots.

In this stage, the eggs hatch into the larvae. The larvae feed on the soil’s fungi, algae, and organic content. Within two weeks, they mature into pupae.

This is the final stage before adulthood. In this stage, the pupae remain in the soil until they emerge as adults after 4-7 days.

The adult fungus gnats live for about one week. Once they’ve reached adulthood, they mate, and the cycle begins again. If conditions are favorable (i.e., there’s plenty of moisture), a female fungus gnat can lay up to 300 eggs in her lifetime!

As you can see, the life cycle of a fungus gnat is relatively short. This means they can reproduce very quickly, leading to a severe infestation if left unchecked.

Where can you see Fungus Gnats?

You’ll typically find fungus gnats in the kitchen, near windows, or on potted plants. They fly around the home and are attracted to damp conditions. So this means you can find them in your garbage bin, near the sink, or in any other moist area.

Why is my soil attracting gnats?

Fungus gnats come from eggs that are laid in damp houseplant soil or near plant roots. If you’re seeing fungus gnats around your indoor plants, it’s likely because the conditions in your soil are favorable for their reproduction.

Fungus gnats thrive in moist, humid conditions with temperatures between 68-86°F. They also prefer soils with high organic content. If your soil is too dry, they won’t be able to lay their eggs, and the larvae won’t have anything to eat.

If you see small flies around your plants, chances are they’re fungus gnats!

The damage fungus gnats can do to your plants

Fungus gnats are not known to transmit diseases to humans or animals. However, their larvae can damage your house plants by eating away at the roots. This can stunt the plant’s growth and in severe cases, kill the entire plant.

If you have a severe infestation, the damage can be significant. In extreme cases, fungus gnats can kill a plant. However, this is rare and usually only happens if the fungus gnat infestation is left unchecked for an extended period.

How to get rid of fungus gnats organically?

The first thing you want to do is to get rid of adult gnats, as they will stop laying eggs. After that, you need to kill the larvae since they’re the ones doing the damage. 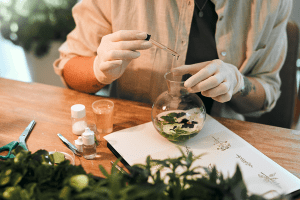 Trending
What Every Grower Must Know About Hydroponic Nutrient Solution

What I will share with you will also work for outdoor infestation.

The secret to getting rid of fungus gnats is to use solutions that will target them in all stages of their life cycle and to be consistent.

The plan is this:

How to kill fungus gnat larvae?

You can do a few things to prevent the fungus gnat larvae from developing into adults and laying eggs.

Let’s talk about how to make your soil unfriendly to fungus gnats. The key is to make the soil too dry for them. You can easily cover your soil with sand, gravel, or perlite.

Replace the potato slices every 1-2 days until you don’t see any more fungus gnats.

Diatomaceous Earth (DE) is a powder made from the fossilized remains of algae. It is natural and non-toxic to the environment. Make sure it is food grade and not pool grade.

Diatomaceous Earth contains silica, a sharp substance that can cut through an insect’s exoskeleton. This causes the insect to dehydrate and die. To use DE, simply sprinkle it on the surface of your DRY soil. It works the same way to kill adult fungus gnats and other insects.

DE is a great way to get rid of fungus gnats organically because it doesn’t harm potted plants or animals. It’s also long-lasting, so you won’t have to reapply it as often as other methods.

Make sure to wear a dust mask when applying DE to avoid inhaling it.

Hydrogen peroxide 3% can be used as a soil drench and is a great way to kill fungus gnats larvas instantly. Simply mix one part of hydrogen peroxide with four parts of water and pour it into a spray bottle. Then, spray it on any affected areas, and the larvas will die on contact.

Cinnamon is another excellent way to get rid of fungus gnats organically. Cinnamon helps control fungus gnat populations by killing their larvae.

To use cinnamon, simply sprinkle it on the soil surface. You can also add it to a spray bottle and spritz it on any affected areas.

Neem oil is a natural insecticide that comes from the neem tree. It’s safe for humans and animals but deadly for fungus gnats larvae.

To use neem oil, mix it with water at a ratio of two tablespoons per cup of water. Then, pour it into a spray bottle and spritz any affected areas.

How to get rid of adults

There are a few different ways to get rid of fungus gnats:

You can use many traps to kill fungus gnats, but my favorite is the yellow sticky trap. You can find them at your local garden center or online.

Put of baby food jars: Fill the jars with apple cider vinegar or any other vinegar, then cover the top with plastic wrap and poke small holes in it. The fungus gnats will be attracted to the vinegar, and they’ll get trapped in the jar. Place these jars near your infected plant.

The same is true when trying to eliminate indoor edible plant gnats.

How to prevent fungus gnats?

Here are some great ways to prevent fungus gnat infestations:

Don’t over water your potted plants – Over watering your plants is one of the main reasons why fungus gnats are attracted to them in the first place.

Fungus gnats can be a real pain, but there are many different ways to get rid of them with a home remedy or with an organic method, so you should be able to get rid of them relatively quickly. Make sure to take preventive measures so they don’t come back!

Thanks for reading, and I hope this was helpful. 🙂