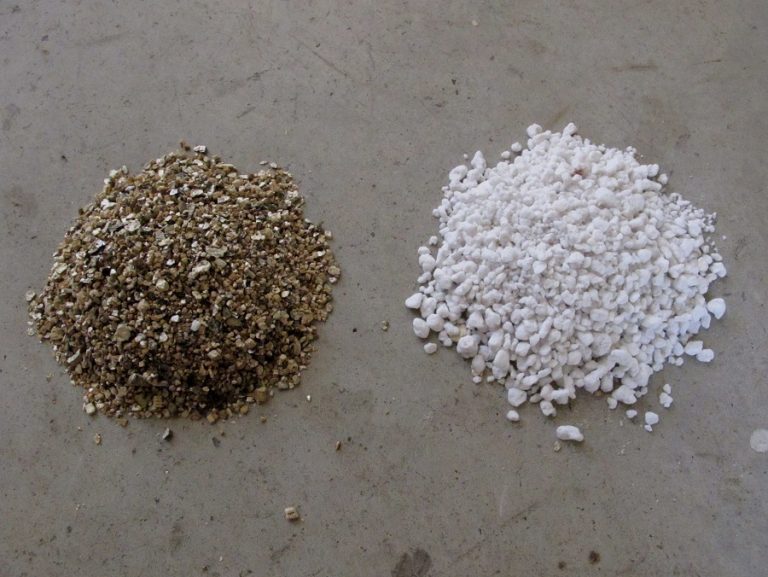 If you happen to be at a garden center trying to decide what is going to better suit your plants? Well, vermiculite and perlite are quite similar, which is usually why people think about this. However, some key differences help you put things into perspective where the two are concerned.

Apart from just knowing how to contrast perlite and vermiculite, you also need to create the best environment for your garden plants. Water and nutrients are essentials in growing garden plants, as is soil aeration.

However, not all garden soil environments have these elements as much as they’re needed. If your garden is one of them, you may want to start thinking about perlite or vermiculite.

Today, we are here to tell you all about the two. By the time we’re done, you will be educating others about whether they should choose perlite or vermiculite, based on their plant growth needs!

Perlite is a compound made from volcanic rock. It has the nickname “volcanic popcorn,” based on the fact that it’s created when the said volcanic glass is heated enough to expand and pop.

The result is a highly porous, white, lightweight rock. From a distance, we wouldn’t hold it against you if you thought you were looking at a collection of Styrofoam balls. On that note, it would be best if you didn’t use styrofoam as a stand-in for perlite.

Pelite is relatively high in water content, therefore when heated to at least 1500F it will cause the water content in this rock to evaporate. Thanks to a cavern-like texture, you’d be hard-pressed to find a similar material that sheds water with the kind of effectiveness of perlite. Vermiculite doesn’t shed water like perlite does and is instead a better holding agent.

The impressive thing about perlite is that while it may not hold water, it can help to a small degree to hold minerals for your plants.

It may be confusing to hear that perlite doesn’t retain water but can still retain plant nutrients. These two capabilities feed into why perlite is hailed as healthy compound drainage for soil.

Perlite use improves the soil structure and does an amazing job of getting the required oxygen to plant roots. 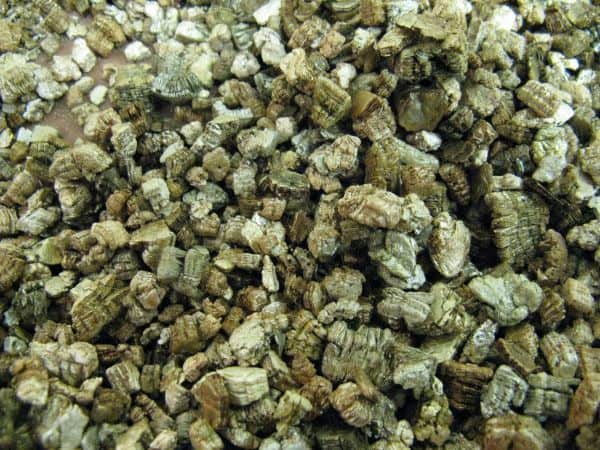 Like perlite, vermiculite is naturally occurring, and it expands when it is heated. Vermiculite is a name given to hydrated phyllosilicates (elements with an aluminum iron magnesium composition) with a shiny aesthetic that is sometimes grayish-brown and sometimes silvery-gold.

The heating process causes the mineral to expand greatly to many times its volume. The result is that the once flaky mineral takes on a pebble-like appearance.

The material processing continues to yield the fine, medium, and coarse vermiculite grades you may see in garden use. The material is sterile, lightweight, non-toxic, mostly non-reactive to acids, and is safe for many uses.

If you need a compound that holds water well, we’d say you should check out vermiculite. Perlite may shed water better, but it has nothing on vermiculite in the moisture retention space.

Vermiculite was said to contain asbestos fibers, but this was nothing more than a rumor. However, it is important to note that there was once a time when asbestos was present in vermiculite. You may even still find it in attic insulation of older homes.

The past asbestos problem existed between 1919 and 1990. The source was a mine in Libby, Montana, that supplied approximately 70% of commercial vermiculite needs.

The vermiculite deposits, which was sold under the brand name Zonolite, contained naturally-occurring asbestos. This was the tremolite-actinolite variation.

Note, however, that once the asbestos was discovered, the mine was shut down. So, if anyone tells you that asbestos is present in today’s Vermiculite, that person has some research to do.

What Is the Difference Between Perlite and Vermiculite?

If vermiculite and perlite both have similar uses in the garden, how does a plant benefit from your choice of one over the other?

The real difference lies in the water retention capabilities of each medium. Looking at things from the perspective of how well each holds moisture helps you decide which one should be used for your gardening needs.

If your gardening efforts involve plants with a high water requirement, you may want to implement vermiculite in your soil mix. If you opt to use perlite in such contexts, you’re going to be disappointed because the soil will dry out.

On the flip side, plants that thrive in dry conditions will not benefit from your using vermiculite. There’s just too much moisture in the medium, which may create issues for your plants, such as root rot.

The worst-case scenario is that you end up seeing your plant die instead of seeing them grow.

With the gardening tips we  gave you above, you should have no problem starting with perlite and vermiculite. If you want to improve your soil conditions, so that seed can grow, it warrants knowing which medium to use in which context.

However, people tend to have common questions about the two as they consider implementing them in their potting mix.

So, here are some answers to the questions, which should put concerns about your soil drainage capability and soil aeration needs to rest.

Is Vermiculite or Perlite Better?

From an objective standpoint, we can’t cite perlite or vermiculite as better for your potting mix soil.

You’re going to have to consider the moisture requirements of whatever seed you’ve planted, which will help you grow your plant effectively with one of these two compounds.

Perlite is excellent if you want something to loosen heavy soil, which can improve drainage in your flower beds. So, for plants that need little water to thrive, you don’t want a material that has great moisture retention.

The increase in air flow, when using perlite, makes it easy for oxygen to reach to the plant roots.

Trending
Diagnose, Treat and Prevent: The Secrets to Eradicating Mold on Pots

However, if you need is for better water-holding, then vermiculite is the better alternative. If you notice that your soil drains much too quickly in the seed starting process, you need a compound that can better retain water.

Vermiculite acts as a superb holding agent in potting mixes. we would even go as far as saying it’s like a sponge.

Perlite Vs Vermiculite: Can You Substitute One for the Other in Your Potting Soil?

The only way you can substitute perlite for vermiculite and vice versa is if your potting soil aeration and drainage capabilities don’t have much bearing on the plants’ ability to grow.

Some plants can thrive well in almost any context, even if clay soil is in the mix.

You probably don’t even need to mess with the potting soil mix in such instances since you don’t need the soil to stay moist or dry. Still, you could use either medium.

Note, however, that your gardening efforts are very unlikely to have such a context. For example, if you can’t access anything but clay soil, you likely want to modify its water retention properties.

Perlite and vermiculite tend to be used to either make potting soil drain water more or less effectively. In either case, the plants in the garden have unique requirements. Hence, you can’t substitute one material for the other.

What Are the Pros and Cons of Perlite?

Perlite could potentially become a fundamental part of your gardening needs. If so, we think it’s a good idea for you to understand how the benefits we’ve already highlighted stack up against the potential drawbacks.

That’s a lot to be happy about, right? We thought so too. Compared to the downsides, we would say that’s a laundry list.

Let’s have a look at the drawbacks:

What Are the Pros and Cons of Vermiculite?

You could just as easily choose to use vermiculite for your gardening needs, especially if you don’t need water to drain too quickly.

Like perlite, vermiculite also has its list of ups and downs to consider before choosing to plant your flowers with it in the mix.

Let’s start things off with the upsides:

Don’t expect all roses with vermiculite either, as there are a few downsides that warrant healthy discussion.

Here are the downsides:

What Are the Fundamental Reasons to Use Perlite Vs Vermiculite?

So, with all we’ve said up to this point, can you identify when you use perlite vs vermiculite? You probably can, but let me just go over a few of the main use cases for the two.

You’d opt for perlite in the following cases:

Consider vermiculite in the following cases:

In the perlite and vermiculite contest, you use perlite when soil drainage is more important. You use vermiculite when you need to retain more moisture in your soil.

Perlite and vermiculite are superb elements to add to your soil for different soil amendements reasons. While there’s a huge difference in what the two can do for you, they both have their place in your garden.

That’s why we’d never put perlite vs vermiculite and say one is better for the soil than the other.

We would need to know the context of the soil first. If it needs to be dry, then we’d suggest perlite, whereas if moisture is important, we’d suggest vermiculite.

Here’s a fun fact for you. You could even mix the two and get the best of both worlds! Just be careful in handling them, though.

While they are not toxic, long-term exposure could make your lungs more susceptible to respiratory issues in the future.